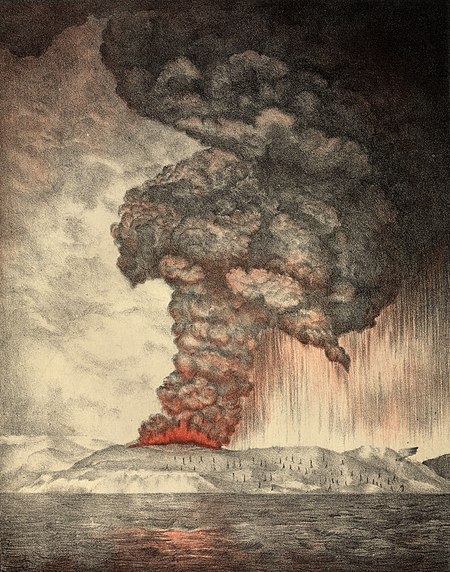 In this day and age, we see some volcanic eruptions that seem to be quite devastating in their effects on the environment and the casualties they cause. However, the deadliest volcanic eruptions, “deadliest” defined here as having the biggest death toll to humans, happened long ago primarily in the 17th and 18th centuries in a slow succession of each other.

We begin in 1815 at Mount Tambora in Indonesia with what is arguably the most violent volcanic eruption recorded in human history. In Mount Tambora’s case, 100,000 lives were lost to the initial explosion with many more dying from the secondary, environmental effects that took place in the years following.

Tambora’s eruption sent plumes of smoke and gases over the world, causing crop death, famine, and extreme cooling temperatures, causing an unknown amount of people to die (some people have estimated the overall death toll to be as high as over 250,000). In recent history, Mount Tambora has made its debut again with increased seismic activity and steam venting. In 2011 this led to the Center for Volcanology and Geological Hazard Mitigation (CVGHM) raising Tambora’s alert level and the subsequent monitoring of tremors from August to September 2011.

The second deadliest volcanic eruption in human history can also be traced back to Indonesia in the Sunda Strait between Java and Sumatra, where the volcano Krakatau lies and exploded in 1883. Krakatau, unlike Tambora, was not a stratovolcano but a caldera; the primary difference between the two being a stratovolcano has retained its cone shape while a caldera has collapsed into its chamber where magma once resided.

Also unlike Tambora, Krakatau did not strike famine across the region but tsunamis, wiping out close to 36,000 people in its wake. Additionally, Krakatau’s explosion resulted in pyroclastic surges, which is an extremely hot, flowing mixture of rocks, gas, and ash. During the 17th century, not much information was readily available to the world and so they did not garner world-wide attention; in today’s world, natural disasters as devastating as these would garner international attention.

Moving into the 18th century, 1902 France was the face of a volcanic eruption on behalf of Montagne Pelee, a stratovolcano on the island Martinique and one of the most active volcanos found inside the Lesser Antilles arc. Montagne Pelee is no stranger to volcanic eruptions, as evidenced by the numerous (over 20) erupted that has occurred there over the past couple thousand years. The 1902 eruption, in particular, destroyed St. Pierre, which was known as the “Pearl of the Lesser Antilles”. This eruption killed an estimated 30,000 people mostly at the hands of pyroclastic flows, which encouraged studies on the topic of different types of volcanic activity.

In 1985, not too long ago, the stratovolcano Nevado del Ruiz erupted and killed nearly 25,000. This volcano is unique from the past three in that it is covered in a glacier, and due to climate change, the melting of the glacier has resulted in additional complications during eruptions. In 1985, casualties primarily resulted from “lahars” or destructive mudflow, which was a direct result of the glacier melting and the eruption combined. This is considered one of the deadliest volcanic eruptions of South America, and it is active even in 2019 with increasing seismic activity.

“Most Powerful Volcanic Eruption In The History Of Mankind”

“What is the largest eruption ever? | Volcano World | Oregon State University”

Try Audible Premium Plus and Get Up to Two Free Audiobooks