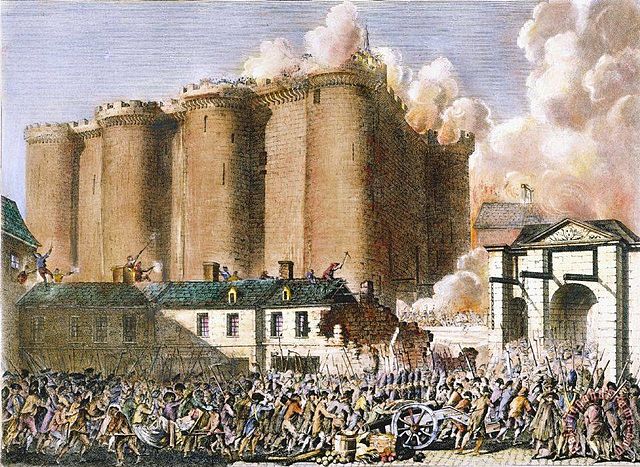 These outcries for change were a result of the several problems plaguing France before the French Revolution took place. There was widespread poverty in various sections of society which was magnified by unreasonably high taxes while the novelties were still living lavish lifestyles. It will soon result in the violent revolt of the people against their king.

The Division in Society before the French Revolution

The First Estate consists of priests; the Second Estate are nobility; and the Third Estate are peasants and bourgeoisie and other common folks in society who are not part of the first two estates.

The First and Second Estate numbered half a million in a country with a population of 24 million people at the time. At the same time, there was the gradual emergence of a new group in society that is part of the third estate, but their influence and wealth can rival that of the first and second estate, they were called the Bourgeoisie.

The priests played a significant role in the daily life of the people then. In addition to their religious duties, these priests run the schools and the Church. They also collect taxes from citizens and landowners. The Church does not pay taxes to the government.

As a result, priests in high positions of the Church lived in luxury. These priests most of the time came from families of nobility. Bishops and Archbishops had great political influence within their community.

Meanwhile the priests who were not born out of nobility were assigned to be parish priests and put in small parishes and chapels that served the poorer part of the community. This led the parish priests to be more acquainted with the issues that the common people faced daily and had for them to support the grievances of the people within their community.

The nobles who were part of the Second Estate lived in comfort and power. They hold high positions in government, the Church, and the military.

They owned most of the land in France but paid almost no tax for these lands. But not all nobles are rich, there are a few of them who live in remote and poor lands.

Several times the nobles tried to resist the King’s power in France. But throughout the 17th century, the leadership of Louis XIV was unshakable, and his authority cannot be questioned. This only changed when Louis XV and Louis XVI inherited the crown of France. The nobles had the opportunity to ask the king for additional privileges and rights. These privileges left the common people suffering because someone had to pay the taxes that the nobles got exempted from.

The Third Estate consists of people who do not belong to the first two estates. Whether rich or poor, whether worker or businessman, they are part of this estate. They constitute the largest estate in French society.

Because of the old way of farming that was almost indistinguishable from the way of farming in the Middle Ages, farmers had low yields even though the farmland was large. This has resulted in more hardship in the lives of ordinary farmers.

Yet these farmers bear the burden of paying high taxes because the Church and the nobility do not pay taxes, the crown imposed most of the tax on the ordinary citizens. There are regions in France where 60% of a family’s total income goes only to paying taxes.

This was the sowing seeds of discontent and anger in the mind of the masses and peasants against the nobles and the king. They want a fairer taxation system. This hostility only worsened after a severe winter hit France and a poor harvest in 1788.

Due to the poor harvest in 1788, the shortage of grain rapidly increased prices within the cities. The city’s poor workers need to spend half of their total family income just to buy a big loaf of bread.

The Middle classes, or Bourgeoisie, consisted of merchants, bankers, lawyers, philosophers, and low-ranking government officials. Unlike the rest of the Third Estate, the Bourgeoisie had money, influence, and education. Because they were not born into a noble family, they could not hold or rise to high positions of government, Church and military.

In the 18th century, most of the bourgeoisie were fascinated by the ideas brought by the Enlightenment and this resulted in them doubting the system of government at that time-that the priests, nobility and the monarchy were the considered the ruling classes. From enlightenment, they got the idea of ​​“Equality and Liberty”, and this became the idea that drove the movement for radical change in France.

Depletion of France’s Wealth Due to the American Revolution

By the middle of the 18th century, France was almost bankrupt due to the huge debt it had accumulated under the leadership of Louis XIV. Most of the treasury were used towards wars that France joined and to maintain the luxurious lifestyle of the king. This debt worsened when Louis XIV died in 1715 and when France came to aid the Americans during the American Revolution, the coffers were almost depleted after this.

King Louis XV and Louis XVI both owed large sums to banks. Despite the financial problems of their country, they continued to live luxuriously inside their palace.

Poverty and unfair taxation in France have caused an additional problem as it has made it impossible for the government to meet the amount required to repay the debts it has accumulated.

This prompted the king of that time Louis XVI to call on the First and Second Estate to force them to agree to pay tax for the lands they owned, both refused.

Widespread poverty and France’s financial problems became the seeds of the revolution.